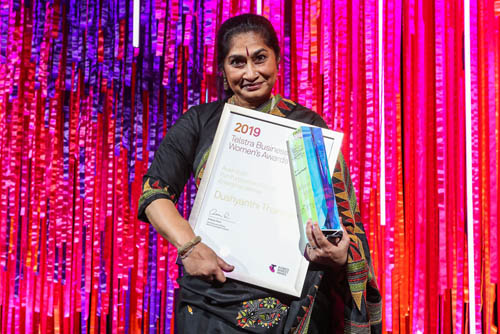 Working in an organisation that provides access to housing and support services, Dushyanthi Thangiah helps the most marginalised Aboriginal and Torres Strait Islander people of the Townsville region.

Yumba-Meta Housing Association has been around since 1995 and has received government accreditation under Dushyanthi Thangiah’s leadership, which has helped it grow five times in revenue, staffing and operations, and established it as an equal player in the sector.

Dushyanthi volunteers for other services such as Meals on Wheels, the Cleveland Youth Detention Centre and Cowboys House.

As a committee member of the North Queensland Hindu Community, she also annually participates in the annual Clean up Australia Day and other local fundraisers.

The impact of Dushyanthi’s work on the local community and her business skills that have helped grow the organisation significantly are what lead her to be the For Purpose and Social Enterprise category winner.

Telstra Business women’s Awards shine a light on women who have challenged the status quo, done things their own way, and achieved success in business.

“This year’s finalists represent a diverse range of industries and backgrounds, and the judges were particularly impressed with their unwavering focus and determination to pursue their passions and achieve success in their own way,” Alex Badenoch, Telstra’s Group Executive of Transformation & People said.

Telstra has recognised outstanding women in business and provided a platform for them to progress their careers and business ideas for 24 years. The organisation aims to build a support network of like-minded people.

Lived experiences and the future of the social enterprise space
Susanna Bevilacqua October 6, 2020

The evolving role of social impact and health care organisations during the pandemic
Weh Yeoh August 18, 2020

Lived experiences and the future of the social enterprise space