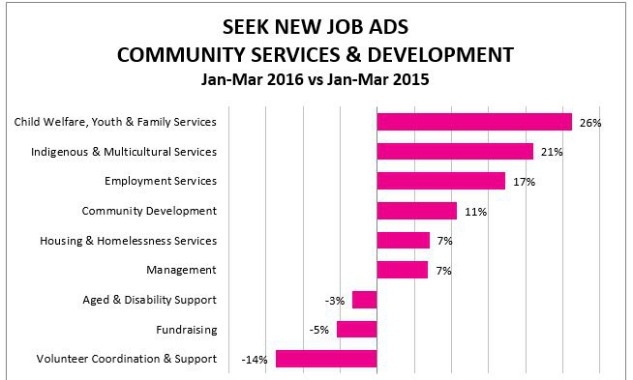 New data released from SEEK shows that there is a high demand for those with experience in community services and development, with new job advertising increasing nine per cent year on year in the industry.

SEEK Employment Managing Director Michael Ilczynski said that there is increasing pressure on the government to provide services to support those most vulnerable in our community.

“The community services and development sector’s growth is heavily dependent on government funding and policy, the growth we are seeing in our job ad volume in this category is perhaps a reflection of the increasing pressure the government is under to support programs and initiatives that support those in our communities,” said Ilczynski.

States that have recently issued additional funding in this area include Tasmania, Queensland Victoria and New South Wales.

At a state level, seven of the eight states and territories have experienced year on year growth in community services and development, with the largest increases in Tasmania (up 47 per cent), followed by New South Wales (up 20 per cent), South Australia and ACT (both up 14 per cent) and Northern Territory (up 11 per cent).

Over the course of the year, nearly 10,000 jobs have been advertised nationally across the industry on SEEK.

“Interestingly, there has been some weakness in the aged & disability support sub category, which is the largest single category of advertising, however this category should benefit substantially across time from the government’s National Disability Insurance Scheme,” said Ilczynski.

Ilczynski said at a national level, there has been strong demand for candidates in child welfare, youth & family services (up 26 per cent), indigenous & multicultural services (up 21 per cent) and employment services (up 17 per cent).

Tags:
Previous Article
Top honours for NFPs at the 2016 SIMNA Awards
Next Article
Sponsored: How to get comfortable with risk

Dr. Martens continues to give back to LGBTQIA+ Community
Lourdes Antenor March 3, 2022

Dr. Martens continues to give back to LGBTQIA+ Community

Sponsored: How to get comfortable with risk
Mark O'Connor April 18, 2016