Australian ethical announces recipients of its largest ever community grants

$400,000 awarded to 18 organisations creating better outcomes for communities across Australia and overseas.

Australian Ethical (ASX: AEF) is proud to announce the recipients of its largest ever Community Grants program.

From Melbourne to Marrickville and Borneo to Uganda, each of the winning organisations will receive grants to help create better outcomes in communities around the world.

The final 18 charities were selected from 432 applications, up from 380 in 2019. Nick Chadwick, Foundation Officer at Australian Ethical, said: “The grants program is all about helping small organisations do big things which is why we’re so pleased to see its reach grow with more charities applying, more enquiries and more social media activity. “Of course, we’re even more pleased to be donating more money this year too.”

Just recently Australian Ethical reported record profits as a growing number of Australians look to the leading ethical fund manager to help them do good with their money while also doing well for themselves.

John McMurdo, Australian Ethical CEO, said: “The Community Grants program is a defining feature of our role as a purpose-driven organisation. Since we began in 1986, it was written into our constitution that we would gift 10% of profits to charitable, benevolent and conservation causes.”

“This means the better we do as a company, the more we can donate to organisations such as this year’s winners. And that’s so important because we know that strong, vibrant communities are often sustained by the efforts of locally-led organisations who work tirelessly to make a difference.” Chadwick said: “Not only did the shortlisted charities receive a flood of community support during the selection process, but they also received more than 11,800 votes from Australian Ethical members and the public which goes to show just how valued they are.”

The 18 grant winners represent a wide range of organisations under ourthree core pillars of people, planet and animals to meaningfully extend the impact of Australian Ethical to communities around the world.

The Australian Ethical Community Grants program offers grants of $10,000 – $20,000 to Australian not-forprofit organisations and social enterprises operating both in Australia and overseas.

Each application is assessed against an impact assessment framework and as in previous years, the finalists align with Australian Ethical’s three pillars of people, planet and animals.

Grants are allocated from the Australian Ethical Foundation, which to date has donated more than $3 million to support organisations building resilient communities in Australia and overseas.

When Australian Ethical first began in 1986 it was written into its constitution that it would gift 10% of profits to charitable, benevolent and conservation causes.

Today, this is facilitated by the Australian Ethical Foundation, which allocates funding to charitable organisations and social impact initiatives aligned with the company’s three pillars of the planet, people and animals.

This year, $1.3 million has been provisioned for the Foundation. In addition to the Community Grants program, Australian Ethical makes strategic multi-year grants and impact investments. Employees also devote hundreds of hours to volunteer with non-profit organisations to drive change at the local community level.

McMurdo said: “Thanks to our continuing growth and success, we have more money available for grants this year than ever before and it is an honour to be able to support these 18 organisations who are as passionate about making the world a better place as we are.

“On behalf of Australian Ethical, congratulations and good luck to all this year’s grant winners. We wish you every success.” 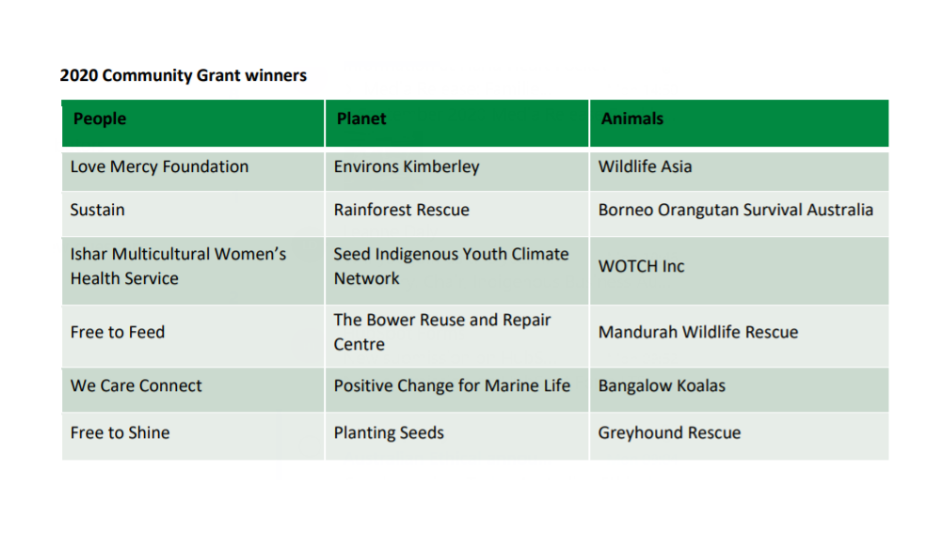