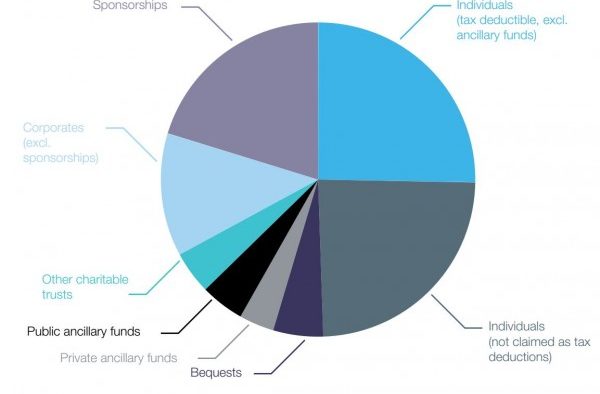 JBWere’s annual report on giving titled: Australian Giving Trends – Signs of Life, finds that after a stagnant period following the GFC, growth in the giving sector is rebounding through a surge in large multimillion dollar gifts, an increasing number of Private Ancillary Funds (PAFs) being established and an increase in corporate donations and sponsorships.

The report finds that from a giving perspective, we have firmly left the GFC behind with continued gains in annual donations achieved through both 2014 and 2015.

Nearly ten years since JBWere’s Giving Trends report was first launched, this year’s report shows that corporate giving has grown even faster than individual donations; rising to $862 million from $635 million in 2007, while sponsorships have grown from $1.1 billion to approximately $1.4 billion.

A strong and growing number of PAFs, has led an overall improvement in the giving environment. The report indicates that structured giving has increased significantly with 300 new PAFs established since 2013, reaching almost 1,400 in total.

However, with over 36,000 people in Australia earning over $500,000 and only 1,400 PAFs, even this giving vehicle has considerable upside potential.

Commenting on the findings of the report, John McLeod, JBWere Philanthropic Services, said with the increasingly competitive Australian dollar, increased business confidence and rising spending in retail, construction, transport and services, there are many macroeconomic reasons for the improving trend to continue into 2016.

“Philanthropy and the not-for-profit sector are evolving and it seems that for philanthropy, we are entering a new golden period,” Mr McLeod said. “PAFs remain a growing force alongside an increase in major gifts and the changing nature of corporate support.

“It is important for the not-for-profit sector to not only understand its own needs but examine who gives and in what proportion to better target and resource their fundraising efforts.”

“Making sense of the changes to the philanthropic landscape is more important than ever and we would like to call all non-profits to action so that they can fully engage in corporates’ support and philanthropic strategies to ensure the sustainability and success of their own organisations into the future.”

Building a philanthropic culture in Australia

For individuals the average individual gift size has increased to $504, only the second time it has ever risen above the $500 level. However, with just over a third (35.6%) of taxpayers claiming a deduction for a charitable gift the level of individual giving remains flat.

“It is still less certain whether we have been successful at improving overall philanthropic culture,” Mr McLeod said. “Hopefully the growth of PAFs and the number of multi-million dollar gifts signals an improvement in that culture and one that might trickle down to all income brackets.”

JBWere also notes the reformed Prime Ministers Community Business Partnership – originally responsible for the introduction of PAFs and workplace giving – are currently looking at potential new philanthropy initiatives which may add to the growing philanthropy offerings available in Australia.

“Any new structures or further additions to the sector’s offerings in the next year or two can only enhance and encourage further depth and breadth in the way the charitable sector operates and funds its impact,” Mr McLeod said.

Shamal Dass, JBWere’s Head of Philanthropic Services, said JBWere was uniquely placed to provide advice to both the funders and the ‘for-purpose’ organisations seeking funding.

“The reason we continue to produce insight and research papers such as Giving Trends is to inform both the funders and recipients on how the sector is evolving so they can make informed strategic decision on how they both invest their limited resources,” Mr Dass said.