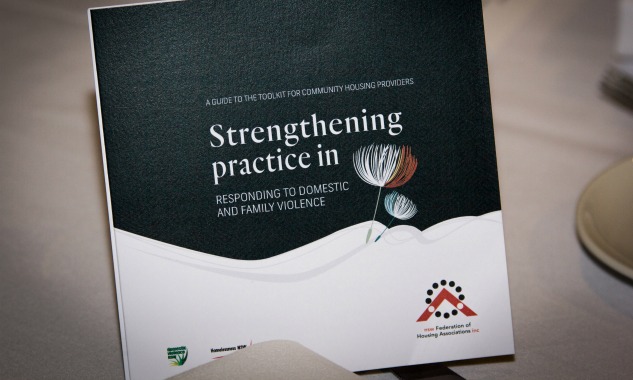 These are the words that echoed in the room at the Safe As Houses event that took place on Wednesday for International Women’s Day.

The NSW Federation of Housing Associations, Domestic Violence NSW, Homelessness NSW and the Sydney Women’s Homeless Alliance joined forces to develop resources designed for community housing providers to help strengthen practice in responding to domestic and family violence and older women’s homelessness. The new resources were officially launched at the event which took place at The Mint and was sponsored by City West Housing, Sydney’s affordable housing provider.

Journalist and TV presenter Deborah Knight was the MC and moderated a panel discussion with representatives from key specialist services and state government agencies who discussed the program and issues surrounding housing, domestic violence and older women’s homelessness.

Susan Ryan, Former age discrimination Commissioner said, “In 2017 we still have an increasing problem of homelessness. Homelessness amongst elderly people is not good enough.”

“India has a national homelessness strategy and we don’t.”

Ryan officially launched the toolkit and said it has “transformative powers.”

Sue Cripps, CEO, SC Consulting Group, said that it is a tragedy that in some cases women have to be over 80 and have a multitude of problems before they are given stable housing.

“We don’t have a national housing strategy in Australia. There is no vision for affordable housing,” said Cripps.

Knight, who grew up in public housing, spoke about how housing in Sydney was still an issue when she was growing up.

“The toolkit will help our members – community housing providers – to better identify the signs of family violence and provide the support women need to be safe, ensuring they have options, either to safely remain in their own homes or to be supported to move to an alternative affordable and safe property,” she said.

Domestic Violence NSW has also played a large role in the development of the toolkit. Moo Baulch, CEO of Domestic Violence NSW said, “Domestic and family violence is a crime and a violation of human rights. Everyone in our community has the right to live free from violence. This new toolkit is an important step in providing community housing providers with a set of resources, to improve their responses to tenants who are impacted by DFV.”

Ryan ended the event by telling all the women in the room to “be bold”.