Dubbed the #OurDemocracy campaign, 20 human rights, environment, and health organisations are uring the two major political parties to support a law reform that would hold politicians to a higher standard of integrity and reduce the distorting influence big industries have in Australian politics.

The integrity reforms in the Framework for a Fair Democracy include a code of conduct for politicians: making lobbying and political donations transparent, banning big, corrupting political donations altogether, and stopping outgoing Ministers from taking up jobs in the industries they regulated.

The call for pro-democracy legislation forms the heart of the new #OurDemocracy campaign, launched today by the Human Rights Law Centre, the Australian Conservation Foundation and the Australian Democracy Network, and formally endorsed by 17 other organisations.

Human Rights Law Centre Senior Lawyer Alice Drury said: “Our democracy works best when the government puts the best interests of people, our communities and our planet at the heart of every decision. But right now that isn’t happening and harmful industries like gambling and fossil fuels are skewing our democratic processes to win political outcomes that put their profits ahead of our wellbeing.”

“The people who are suffering the most from the status quo are already the most disadvantaged — the families torn apart by gambling addiction, and the communities who lost entire towns in unprecedented bushfires fuelled by climate change.The #OurDemocracy campaign is about resetting the rules of politics to make it fairer, more open, and more accountable to all of us,” she said.

Meanwhile, Australian Conservation Foundation’s Economy and Democracy Program Manager, Matt Rose said they joined the #OurDemocracy campaign because “government decisions are not being made in the interests of the community and the planet, but for vested interests, such as the fossil fuel industry.”

“Civil society groups that work on issues such gambling, obesity and gun reform face similar issues because of the way our democratic processes work. This makes people feel let down and excluded from our democracy,” Rose said.

“Our organisations have come together to make our democracy fairer and more transparent by speaking together and helping people reclaim their role in our democracy,” he said.

Director of the Australian Democracy Network, Saffron Zomer, said: “Civil society groups have come together to support this vision for a fair democracy because they know making #OurDemocracy the best it can be is good for their work, their members and all Australians.”

“The #OurDemocracy campaign, launched today, will be building public support over the coming months until our elected representatives see the opportunity to pass these sensible reforms,” he said. 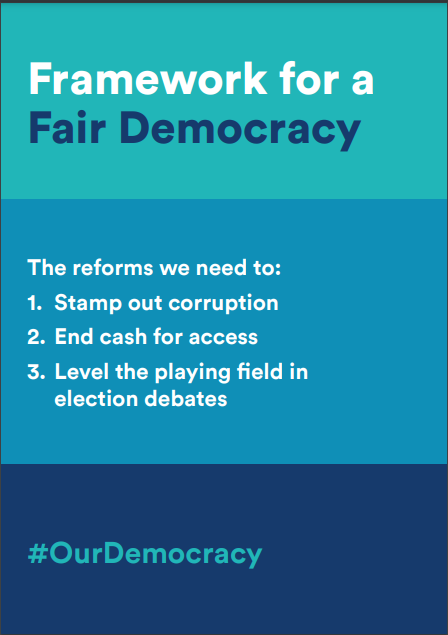 Download Framework for a Fair Democracy to find out more of the #OurDemocracy campaign.