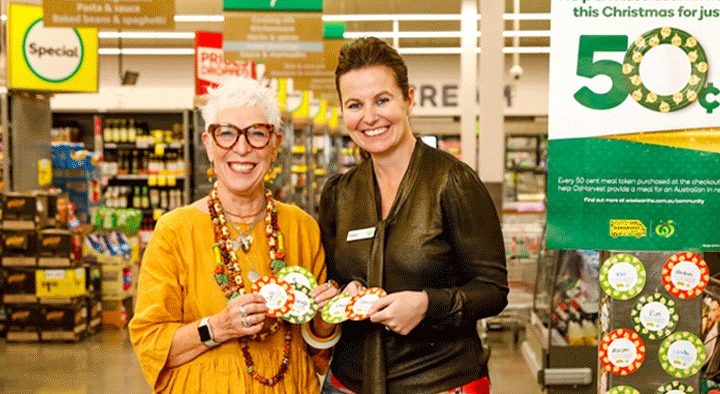 Around five million Australians are experiencing food insecurity,  with demand for food relief services increasing by more than 20% across the country in the last year.

In response to this growing demand, Woolworths customers are being encouraged to purchase a 50 cent meal token during the Woolworths OzHarvest Christmas Appeal, to help OzHarvest feed an Australian in need.

Recent research shows that at least once a week, 30% of food insecure Australians go a whole day without eating, and the Appeal aims to reduce this number over the Christmas period.

Through the Appeal and supplemented by regular donations of fresh produce from Woolworths stores nationally, Woolworths Fresh Food Rescue Partner, OzHarvest, aims to deliver meals to more than 1,300 charitable agencies to help ease the ever increasing need from around the country.

OzHarvest Founder and CEO Ronni Kahn AO said; “Being hungry at Christmas is becoming an increasingly sad reality for many Australians.

“We are out in the community every day rescuing fresh and nutritious food, making a difference to people’s lives. When a struggling family has the chance to come together over a nourishing meal, it gives them the opportunity to reconnect and offers a sense of hope,” she said. “We are asking incredibly generous Woolworths customers across the country to support the OzHarvest Christmas Appeal, so that we can continue to deliver much needed food to charities that support Australians requiring hunger relief.”

By purchasing a 50 cent dinner plate token at the register of any Woolworths store or online from now until 24 December 2019, customers will be able to help OzHarvest provide a meal for an Aussie in need.

“While Christmas can be a magical time for many of our customers, for those Australians not knowing how they are putting food on the Christmas table, it can also be an incredibly daunting time.  The Appeal is so important, and together with our customers, we can all play a role in making a difference.” she said.

“Australians across the country are encouraged to head into our stores and purchase a 50 cent Woolworths OzHarvest Christmas Appeal token, to help OzHarvest provide a meal and support those requiring hunger relief across the nation.”

Over the past two years, the Woolworths OzHarvest Christmas Appeal has raised more than $2 million for OzHarvest, providing four million meals for Australians in need.

This year, the aim is to raise yet another $1 million to support Australian families at a time that can see increased pressure on household budgets.

Woolworths has partnered with OzHarvest since 2015 to help reduce food waste by providing surplus fresh food from their supermarkets to Aussies who would otherwise go without.

Lived experiences and the future of the social enterprise space
Susanna Bevilacqua October 6, 2020

The evolving role of social impact and health care organisations during the pandemic
Weh Yeoh August 18, 2020

Lived experiences and the future of the social enterprise space

How to find the best charity match when donating on someone’s behalf
Pearl Dy December 10, 2019