Tasmania is leading all of Australia’s governments in the race to power its grid with renewables and sell clean energy to the world according to WWF-Australia’s first Renewable Superpower Scorecard.

The scorecard ranks the progress of Australia’s federal, state and territory governments in embracing renewable energy. It assesses each governments’ performance against the three essential stages of becoming a renewable superpower: cleaning up the electricity system; electrifying transport, buildings and industry, and; exporting renewables and renewable-powered products to the world.

Nicky Ison, WWF-Australia’s Energy Transition Manager said: “Australia is blessed with an abundance of renewable energy resources and we have a once-in-a-lifetime opportunity to harness this potential to create jobs and wealth for all Australians long into the future.”

“With the right investments we can not only power Australia with renewables, but become a renewable superpower and sell surplus energy to the world in the form of liquid sunshine, expertise and solar-powered products and metals. There is exciting progress across the country and our scorecard shows some states can learn from others,” Ison said.

WWF-Australia’s scorecard has Tasmania leading the pack for achieving 100% renewables, legislating the largest renewables target in the world, and its progress in renewable hydrogen production.

NSW and Victoria are tied in third place, while the federal government is trailing in seventh.

“The federal government should be the primary agents selling our renewable energy to the world, but our analysis shows the states are currently doing the heavy lifting,” said Ison.

“Despite some positive programs, the focus and scale of action at the national level currently falls short of what is needed to give Australia the best chance of becoming a renewable superpower.”

The scorecard has Queensland and Western Australia in equal fifth place. Both states are taking solid action, but WWF-Australia’s analysis shows neither are fully capitalising on their resources and huge potential to become globally significant renewable exporters.

Australia’s governments are collectively investing more than $7 billion in clean energy stimulus measures, but Ison said this is a fraction of what other countries like Germany, France and South Korea are investing.

“Our analysis shows that to become a real superpower, we should look to use renewable energy to produce seven times the amount of electricity we currently consume. That would allow us to meet our electricity demands, transition our transport, industries and buildings to renewables from gas, coal and oil, and export excess power and zero-carbon products to the world. Australia can become the world’s leading exporter of renewables by 2030 if we act now,” she said.

WWF-Australia is challenging governments to think bigger and bolder about renewable energy opportunities both domestically and for exports.

The organisation is calling for a focus in the federal budget on initiatives like Renewable Energy Industrial Precincts, which offer a way for clusters of heavy industries like steel and chemical manufacturing to access affordable renewable energy while decarbonising.

“We have a window of opportunity to create substantial economic benefits for Australia. But we have to act with urgency or we risk being overtaken by other countries who are already outspending us and racing ahead,” said Ison.

The Renewable Superpower Scorecard will be a recurrent analysis with updated rankings to be released ahead of the 2021 UN Climate Change Conference in November in Glasgow. 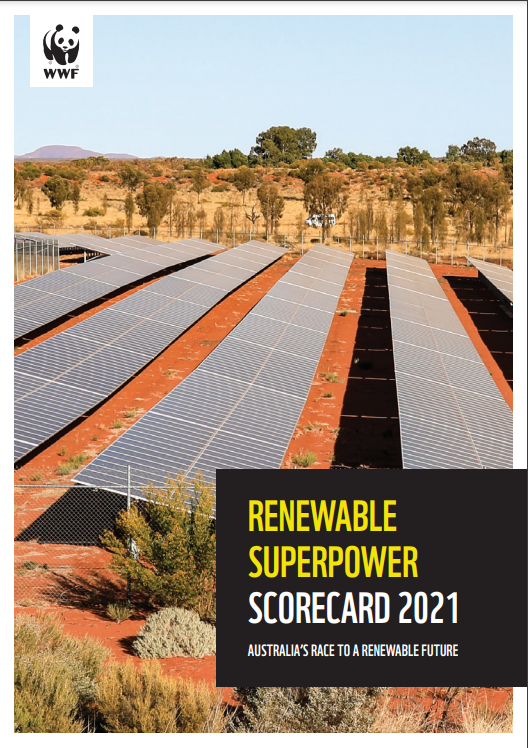 Download WWF Australia’s Renewable Superpower Scorecard 2021 by filling up the form below.