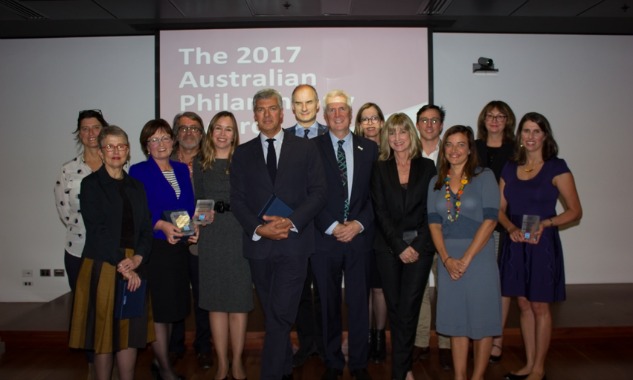 Six of Australia’s most strategic funders were recognised for the impact of their giving at the 2017 Philanthropy Australia Awards in Melbourne on Wednesday night.

Sarah Davis, CEO of Philanthropy Australia, said the Awards provided an important opportunity to recognise the unique accomplishments of those who are working to create lasting and positive change, both in Australia and abroad.

“Although Australian philanthropic organisations stand at the forefront of innovation, their important work is often done behind the scenes. The Awards showcase the many impressive examples of great leadership in philanthropic giving,” said Davis.

“The Awards attracted a strong field across all categories, and our warm congratulations go to all the nominees, finalists and winners.”

The Funding Network (TFN) was honoured with the ‘Best Small Grant Award’ in recognition of its collaboration with non-profit organisation Manjeri, to support their work in Uganda.

The partnership began in 2014 when TFN, whose mission is to build the capacity of grassroots non-profits by helping to democratise giving and facilitating greater community engagement, awarded Manjeri an initial grant of $17,900 to fund their work in Uganda, leveraging the power of social enterprise to build sustainable schools.

Nicholas Harrington, Founding Director of Manjeri pitched at a TFN live crowdfunding event for support to start a taxi bus social enterprise. His compelling presentation raised the funds in just 10 minutes, thanks to the collective contributions of 40 individual donors and matched funding from the AMP Foundation.

Harrington said, “TFN’s holistic approach to supporting grassroots non-profits, like us, is so powerful. Not only is the funding important, but the ripple effect from the opportunity to pitch at TFN has been significantly greater.”

Tags:
Previous Article
14 things Melbourne can do instead of anti-homeless laws
Next Article
Hundreds of charities revoked by national regulator

Opinion: Harnessing holistic giving on an individual and corporate level