The program was developed by REC Solar and multiple program partners with installations taking place across some of the most devastated regions including Kangaroo Island, East Gippsland and Mallacoota between August and December 2021. The Black Summer bushfires impacted 57% of Australians, burned more than 12.6 million hectares of land and emitted 434 million tonnes of CO2. 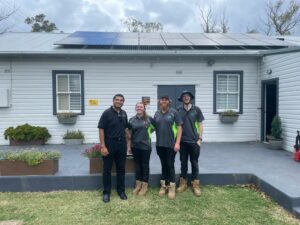 Installation at the Balmoral Village Association

Locals and holiday makers were helpless as bushfires cut off power and roads, and shrouded the skies in smoke as community halls and sporting clubs became refuge centres during the crisis. The REConstruct program has helped these locations get back on their feet, providing a renewable and independent power source, reducing energy bills and carbon emissions.

The flagship installation for the REConstruct program, Clifton Creek Primary School in East Gippsland was completely destroyed by the Black Summer Bushfires and it has been a long road to recovery. School Principal Susan Paul said the community is grateful for the generosity of REC Solar and its partners, for the contribution to their school.

“The bushfires were a traumatic time for all of the families and the local communities. The night that I got the phone call to say that the school was gone was a horrible moment in my life. It looked like that was the end of our little school.”

“We’ve been really fortunate that the REConstruct program has donated an amazing solar panel system to our school. We will hopefully work towards zero emissions, which is the goal not just of our school but also of our community.”

“Being carbon neutral is a really important factor for the future of our school. Having solar panels on our school was something we didn’t think we would have the funds to do, so having it donated was just massive.” 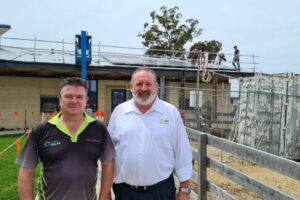 Paul Scerri, REC Solar’s Country Director, Australia and New Zealand, is delighted to see the positive impact the REConstruct program is having on these bushfire affected communities.

“The Australian bushfires were a harsh reminder of the impact climate change is having on our environment today.”

“Renewable, clean energy is integral to the bushfire recovery strategy so that Australians can work towards reducing greenhouse gases and the ongoing likelihood of more long, devastating bushfire seasons.”

“By supplying our award-winning high-power solar panels, REC Solar is proud to be doing our part for bushfire affected areas and continuing to empower communities through renewable energy. It’s great to see REC’s strong commitment to social responsibility come to life in Australia through such an important initiative.”

REC globally has been committed to the mission of responsible solar and in the last year has worked in three continents towards its commitment for CSR with a focus on energizing and empowering local communities in remote and climate-change affected regions, the REConstruct being one of them.

Program partners include Fronius, SMA, SolarJuice, Clenergy and BayWa Australia. Further information on the program can be found online at www.reconstruct.net.au.