Outsourcing the design and print of your association newsletter 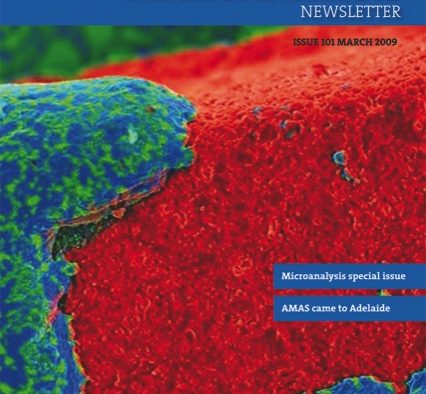 The choice to outsource

Since its inception, the editorship of the Australian Microscopy and Microanalysis’ (AMMS) newsletter has been in the hands of university academics who are members of the Society.

As the editorship has migrated around the country, different editors used various approaches to publishing the newsletter, from printing it themselves on lab-based printers to employing professional publishers.

When the editorship transferred to Martin Saunders at the University of Western Australia in 2001, he took on responsibility for the design and layout of the newsletter and the University publishers were engaged to print the finished document.

“This was done to reduce the spiralling costs encountered by a previous editor who outsourced the process, but resulted in a relatively unimaginative, predominantly black and white format,” says Saunders.

In 2008, the newsletter celebrated its 100th issue and it was decided to produce a full-colour special edition to commemorate the centenary.

Great Southern Press (GSP) was asked to produce the issue as the AMMS was aware of other similar publications they produced and wanted their magazine to be of similar quality.

“The special issue attracted significant support from the members and advertisers, who were attracted by the opportunity to include high quality colour illustrations in their articles and adverts.

“The success of the 100th issue convinced the Society to continue to outsource the design and print of the newsletter to GSP for a further four issues as an extended experiment.”

Saunders says that in recent years, the Society has frequently debated the value of maintaining a printed newsletter, with some proposals for the newsletters to revert to a digital, online format.

“The consensus has been that a print newsletter is still an important communication tool for the Society and that, provided we can maintain a good quality publication without the costs blowing out, we should continue to run it in its current format.

“A key factor in making this decision has been the opinions of our advertisers, who have maintained strong support for a printed newsletter as opposed to an
online format.

“The newsletter also acts as a promotional tool for the Society. Copies are often sent out to prospective advertisers and displayed at national and international conferences to promote the activities of AMMS.”

“The production and advertising documents are a great help to me as editor,” explains Saunders.

“When we produced our first issue with GSP the process was alien to me but the GSP staff were very helpful and were able to guide me through the first issue.

“Once I understood the process, the production and advertising documents made the process very straightforward, allowing us to progress from submitting the various articles and adverts, to the proofs stage and final publication with ease and in a timely fashion.”

As editor, Saunders says he has found the experience of outsourcing the design to be “incredibly positive”.

“As I no longer have to design and format the newsletter myself, I am able to concentrate on attracting articles and advertising, thus raising the overall scientific quality of the publication.

“The current arrangement with GSP has increased the cost of publication compared to the previous approach involving the editor carrying out the design and formatting, while only outsourcing the printing.

The Society has a small core of advertisers who have been very supportive for many years.

“Outsourcing the design to GSP has received strong support from our existing advertisers and has resulted in a few additional advertisers making use of our newsletter.

“Advertising varies from issue to issue, with some issues almost breaking even.

“Our ability to continue to outsource production in the future is heavily dependent on support from our advertisers who have, so far, reacted very positively to the enhanced publication provided by our interaction with GSP.”

Find out more about publishing for associations